Whether you operate a home based business, or have dozens of employees spread around the world we have the best small business phones system to fit your budget and make your company project a bigger, faster and more sophisticated identity.

You can make calls through our phone systems from normal desk phones, cordless phones, cell phones, smart phones, tablets and even your laptop, or desktop computers. You can work from anywhere and still appear to be in the office.

CONSOLIDATE YOUR VOICEMAIL, FAXES &
EMAIL ALL IN ONE INBOX

Our Telephone Systems for Businesses

beONix phone systems built by Epygi work with traditional phone lines provided by Bell Canada, Bell Canada resellers and Cogeco. They can also be used with VOIP (Voice Over IP) lines to reduce, or eliminate international long distance charges. They can even be deployed in a hybrid configuration using a combination of standard phone line trunks in conjunction with VOIP services. Click here to view more features.

At this time of economic uncertainty, Marikkar took a huge risk opening his company by partnering with Venture Carpets Inc. “I am trying to help the people whom I’ve known most of my life in Canada…this project is my legacy,” Marikkar explained. Ultimately, with the combination of experienced employees, Quebec and Ontario investors, and the support of the Ontario government and the city of Belleville, Belletile was a success.

General Manager Rahumathulla Marikkar wanted a phone system that was reliable, had common and unique features and was easy to understand. The most important aspect of Belletile’s decision was that they wanted a system that could grow with their business. Epygi prides itself on providing products that fulfill the customer’s needs today and into the future based on the customer’s predictions.

Prepared for the future

Belletile ultimately chose Epygi for their phone system solution. beONix, an Epygi reseller, had an Epygi QuadroM8L IP PBX installed at Belletile’s headquarters location in Ontario, Canada. They also installed Aastra 53i and 57i IP handsets at the same location; the entire installation only took a few hours.

Epygi was ultimately selected not only because of its impressive feature set and customer service, but also because of the ability for the communication system to grow along with the company. One feature that enables this is the unified dialing plan. The unified dialing plan connects many different locations together thus allowing free calls between different office branches.

The Epygi system provides Find Me Follow Me which allows the system to hunt for a called person in multiple destinations, including a mobile or home phone. This ensures that an actual person always answers their phone calls, not an answering machine or an automated recording.

The caller hears a hold message as the Find Me Follow Me feature attempts to contact the called party. The user can set it up so that multiple destinations are called immediately or that the person’s most probable destination is tried first, and then the other locations are called after. If the party isn’t reached, the call will then automatically be directed to their desk phone so people can leave voicemails at their desk.

This feature allows the employee’s office telephone number and voice features to go with them, giving them the ability to be just as productive on the go as when they are in the office. “After seeing many capabilities like the unified dialing plan and easy management interface, we knew that Epygi was the right choice for us,” said General Manager Rahumathulla Marikkar.

Currently, Belletile has 17 employees, including many that were unemployed after Marikkar’s previous employer, Interface, was shut down. Mr. Marikkar predicts that shortly, the production line will be running five days a week and in 2012, Belletile will have approximately 31 employees. Belletile looks forward to growing their business knowing that Epygi will meet all their future telecom needs. 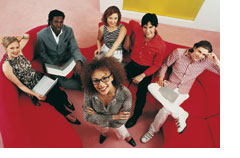 The Children’s Mental Health Services, in partnership with families and communities within Hastings and Prince Edward Counties, Ontario, pro- motes healthy emotional well-being of Canadian children and youth through a range of services and supports. It is a voluntary service committed to the support of youth and their fami- lies through the least intrusive and most confidential manner. The staff is a team of very client-focused pro-fessionals trained in a wide range of therapeutic strategies.

The Children’s Mental Health Services chose Epygi to replace their outdated analog Nortel system over other competitors because of the capabili- ties of the local Value-Added Reseller (VAR), functionality of the switch and the competitive price. The local VAR, beONix Technology, installed the system and provided timely advice on getting the phone lines in and were readily available throughout the setup. The system was installed in a mere seven hours, so the Children’s Mental Health Services’ employees were able to take advantage of the Epygi system and features immediately.

The QuadroM8L that replaced the aging and at-capacity system is a very feature-rich and price-compet- itive IP PBX solution. It offers eight FXO lines and up to 96 IP phone users thus allowing for large growth for maturing companies. The features that were most use- ful to this office were the increase in voicemail boxes, voicemail-to-email capabilities and the flexible auto attendant.

The increase in voicemail boxes, included in the base price of the system, was the initial reason Children’s Mental Health Services selected Epygi. In addition to the added voicemail boxes, the voicemail-to-email functionality was an important feature for the operation. Epygi’s

voicemail-to-email functionality works by storing voicemail messages of all of the employees in the industry-standard WAV Audio for Windows format. Users are then able to play them on their cell phones, multimedia PCs, attach them to e- mail messages and forward them to the right people. This is helpful because with normal voicemail, messages that are left after hours are not able to be addressed until the next time the person is in the office.

The flexibility of the auto attendant ensures that each call is routed to the correct recipi- ent. This makes business run more smoothly and guarantees that the customer reaches someone who can assist them best.

“The technology improvements compared to the old system aided in our ability to make some productivity gains. The voicemail to email had a marked improvement in the ability of the employees on the road to perform their jobs.

beONix Technology
Simplifying IT. We provide technical human resources for your business. Save money by letting us look after your IT staffing needs while you concentrate on your core activities.